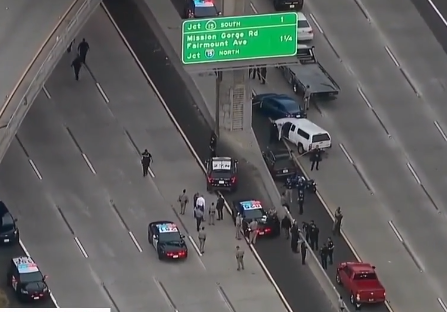 SAN DIEGO (KGTV) — A California Highway Patrol officer is in serious but stable condition after being shot in Mission Valley Wednesday evening.

According to CHP, the incident began while an officer investigated a crash along Interstate 8 near the 805 around 6 p.m.

At some point during the investigation, CHP said the officer became involved in a struggle with a pedestrian when the officer was shot in the thigh.

Several good Samaritans at the scene were able to help detain the suspect, who was identified only as a 25-year-old San Diego resident.

The officer, who is an eight-year veteran of the department, is in serious but stable condition, CHP added.

Watch the full news briefing below:

Man Attacks Deputy At School, Gets Killed In Front Of His Kid

Man shot by Killeen Police officer during disturbance outside