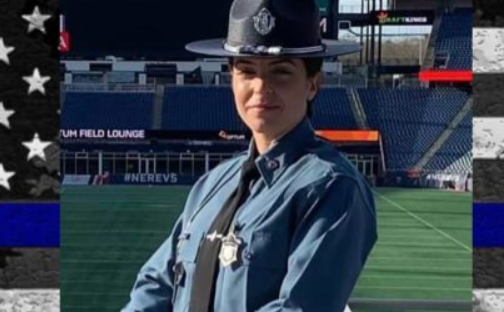 Stoneham, MA – Massachusetts State Police (MSP) Trooper Tamar Bucci died in the line of duty Thursday night after a tanker truck crashed into her patrol vehicle as she was trying to help a disabled motorist.

The 34-year-old trooper was attempting to pull onto the shoulder of northbound Interstate 93 near exit 27 just before midnight on March 3 when a tanker truck filled with approximately 10,000 gallons of gasoline crashed into her patrol vehicle, MSP Colonel Christopher Mason said, according to WCVB.

Trooper Bucci had the blue lights of her patrol car activated and was trying to assist a disabled motorist when she was hit.

The tanker truck’s momentum shoved her cruiser off the roadway, Col. Mason said.

Two Good Samaritans jumped out of their vehicles to help pull the gravely-injured trooper from her mangled patrol vehicle.

A Stoneham police officer then performed CPR prior to Trooper Bucci being rushed to Massachusetts General Hospital, where she succumbed to her injuries, WCVB reported.

The female driver of the disabled vehicle was transported to the hospital to be evaluated.

10 Wounded By Felon In Shooting After Louisiana Mardi Gras Parade

Police: Murder suspects from Dallas who cut off their GPS monitoring devices found in Cambodia